This is a list of my favorite comic book artist and other illustrators, disconcertingly many of whom have names beginning with "J". You can click the pictures to enlarge them.

Bill Watterson is the creator of Calvin and Hobbes, whose cartoony art is expressive, lively, clear and dynamic. The art got progressively better as he was writing the strip, so I especially recommend the final third of his output; it's some of the best cartooning you'll ever see. 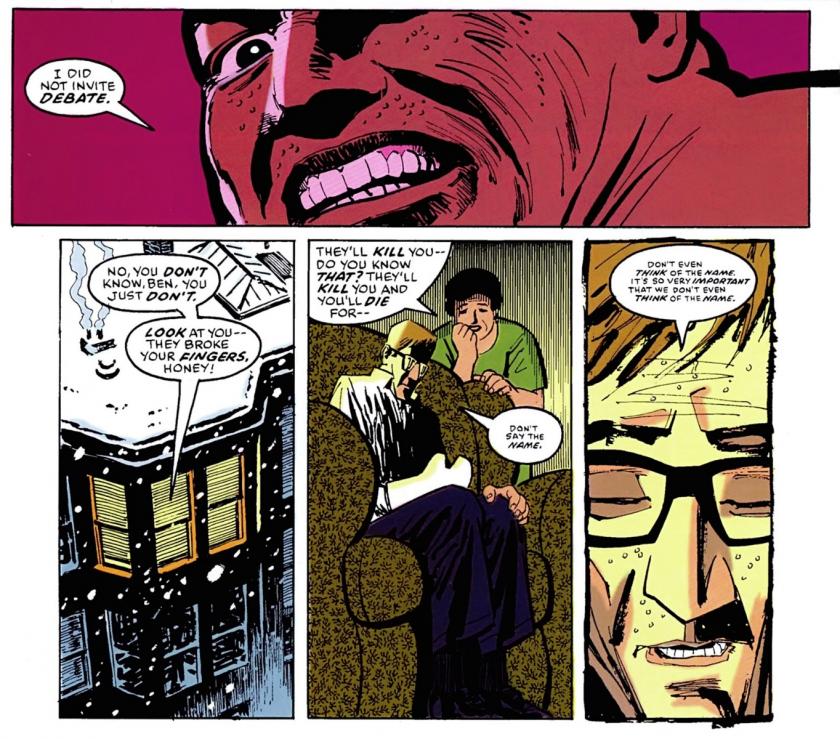 David Mazzucchelli started out as a superhero artist, then switched to creating more personal comics in a sketchier, less detailed style, and he now teaches comic book storytelling at the School of Visual Arts.

In 1986, Mazzucchelli provided art for the superhero comic Daredevil: Born Again, written by Frank Miller at the top of his game. Some of the things that stand out to me are the excellent "acting abilities" of the characters, and how they are drawn in a realistic style, but with occasional forays into expressionism to enhance the emotions in the scene. Another collaboration produced Batman: Year One, with similar, though less detailed, art.

A more recent, notable work from Mazzucchelli is the cartoonier Asterios Polyp from 2009, which takes the expressionism further and largely feels like an experiment with the formal properties of the comics medium.

Two people who have drawn in a style similar to the one Mazzucchelli used in Batman: Year One are John Paul Leon and David Aja. There are also similarities to the art of Alex Toth. 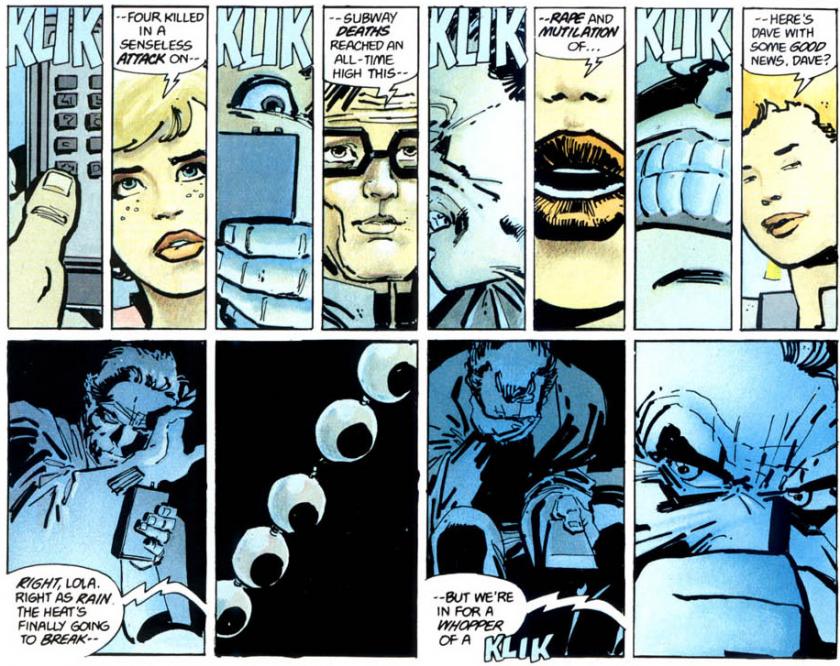 I include Miller here less for his art (which is good) than for his exceptional storytelling ability. The comics he created in the mid-80's, sometimes with David Mazzucchelli as a collaborator, are amazing in their use of the comics medium, and should be studied by anyone who wants to create dramatic comics. I like how he very deliberately varies panel sizes to create a rhythm, the staging and sense of design in crafting both single panels and entire pages, the ways he juxtaposes panels to show flashbacks or different aspects of a story, and how he will often convey information and create a mood by drawing silent, expressive faces.

Unfortunately, after the 80's, Miller's writing quality declined steeply, and I would recommend against buying anything he's written since the first Sin City collection, from 1991.

Two of Frank Miller's main inspirations are Goseki Kojima and Will Eisner.

Writer and artist of Locas (created 1982, still ongoing). An expert storyteller who uses a very economical style, condensing a long story into its essential parts. His art started out looking a bit rough, with lots of hatching and shading; then the drawings improved and the hatches disappeared. In the last couple of decades, his work has become a bit cartoonier (personally, I liked the touches of realism the art used to have).

The collection "Flies on the Ceiling" contains several shorter comics where the storytelling is especially interesting and/or condensed.

The Art of Jaime Hernandez: The Secrets of Life and Death

Small kids in his comics have looks inspired by Hank Ketcham and Charles Schulz. You can also see an influence from Dan DeCarlo (although in general, their art is quite different). 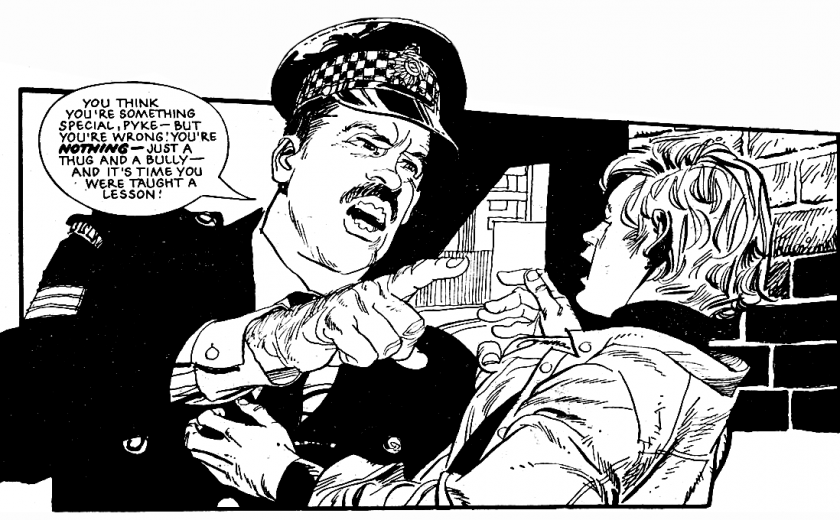 John M. Burns is an English comic strip artist who worked on Modesty Blaise, Jane, Seekers and (my favorite) The Fists of Danny Pyke, the latter published in Eagle. While I dislike that the shape and placement of the panels in Danny Pyke seems random and haphazard, that seems to have been the standard in Eagle at the time (1983-85), and I love the realistic art combined with the loose and varied ink lines. 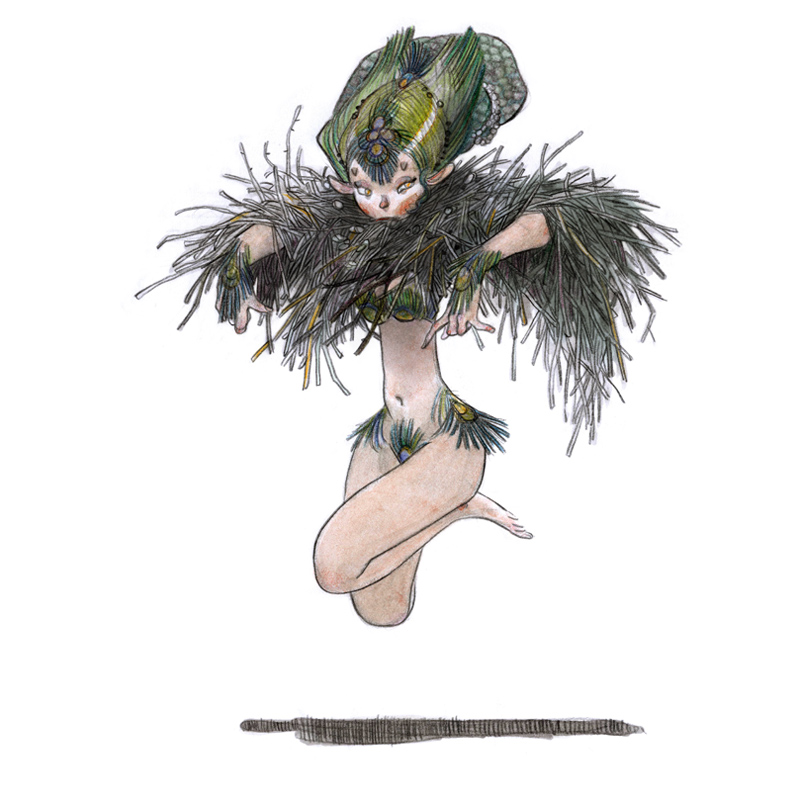 Man Arenas is a motion picture production designer and art director who has also drawn two gorgeous books about the faun Gabriel. To be honest, I find the writing dull, but the books are worth buying just for the stunning art; I can't think of any comic artist with a better sense of composition than Arenas, and his cartoony, lively characters in lush watercolor settings are a joy to watch. 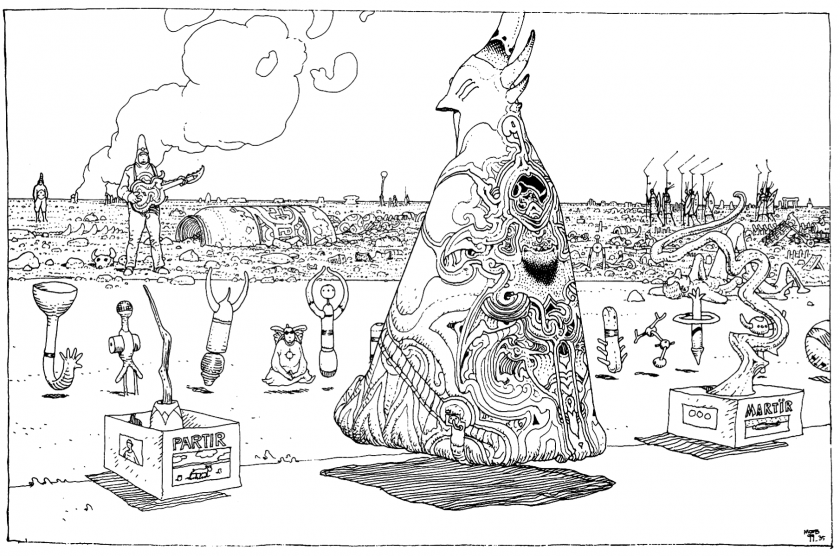 Jean Giraud is known for drawing the Western comic Blueberry and creating concept art for movies like Alien and The Fifth Element. My favorite art of his comes from the more surreal works he created under the pseudonym Mœbius, starting with Arzach and Le Garage Hermétique in Métal Hurlant in the 70's, combining his characteristically shaded art with an inventive sense of design.

Swedish children's book illustrator (though he's also drawn an occasional comic page), most famous for the Pettson och Findus series of books. Inspired by the same MAD Magazine artists as Jamie Hewlett, and it shows.

When Findus Was Little and Disappeared 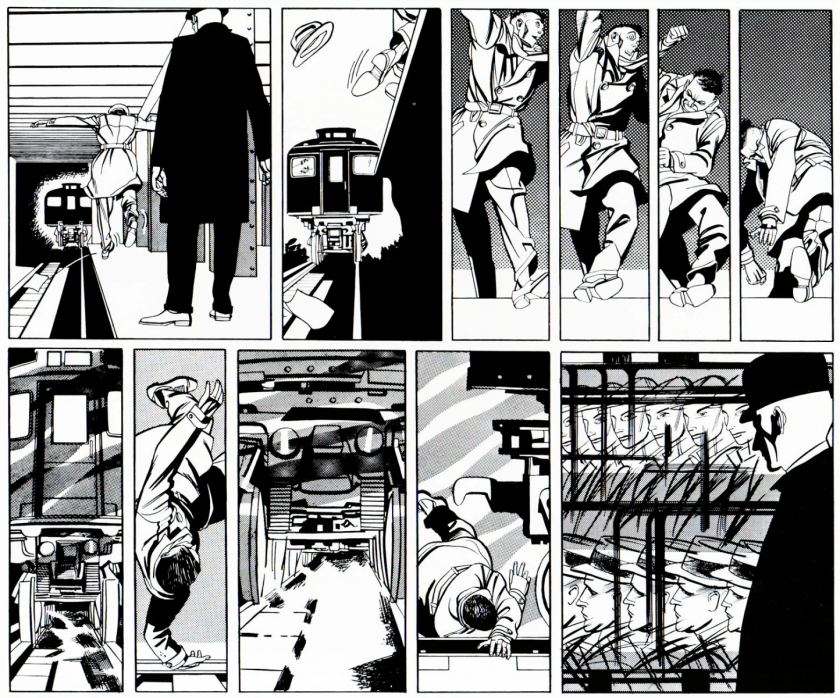 A comics storytelling pioneer who, in the 1950s, fought to change comics from being talky picture-books for kids to visual storytelling for adults. For years, he tried to convince different publishers to let him illustrate a longer story that was primarily told in pictures. As this would have meant fewer stories per comic book, the publishers and editors never once allowed him to draw a comic his way, and thoroughly disillusioned, he gave up on comics in 1964 and started painting instead.

So why is he famous? Well, in 1955, he was given a six-page script called Master Race, and he begged for the chance to expand it to twelve pages. He was allowed eight, and within those limitations, he created a piece of visual storytelling that would stand unmatched for 30 years.

In 2002 and 2004, two huge books about his life and works were published. I'm not sure I want to read them. I get depressed by thinking of all the wasted potential. 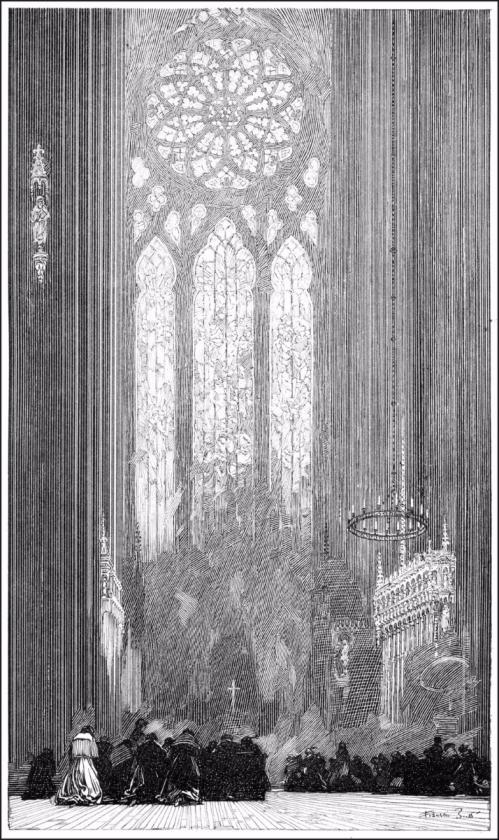 Franklin Booth: Painter with a Pen 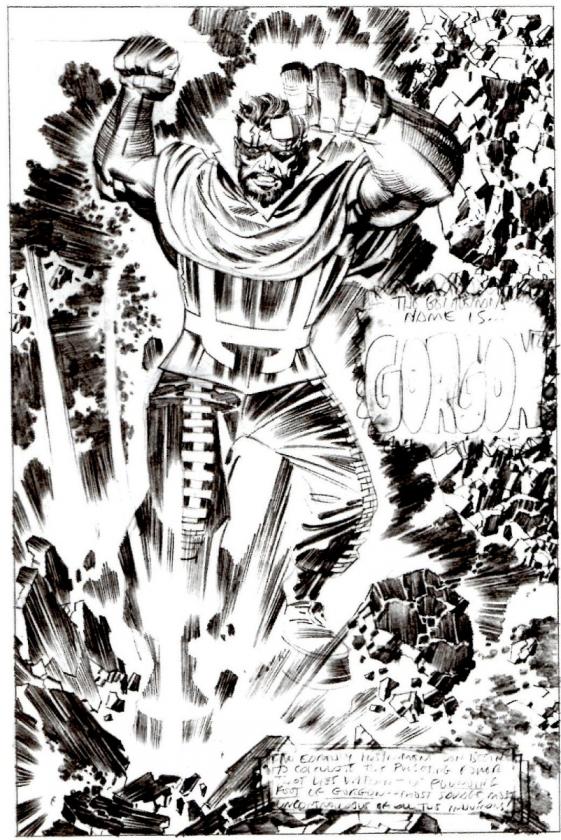 Jack Kirby was the superhero creator. Between the 40's and the 70's, he created or helped design many classic superheroes, including the X-Men, the Hulk, Captain America, and the Fantastic Four. He was also responsible for starting up whole new genres, like romance comics. His dynamic style, cinematic techniques and exaggerated, foreshortened action poses rewrote the rules for comic book art, and influenced a myriad of comic book artists.

I love his sense of design; the weird machines, grotesque characters and just the texture of his drawings.

If you want to know more about Jack Kirby, I highly recommend Tom Scioli's biography Jack Kirby - The Epic Life of the King of Comics.

In the early days of Marvel Comics, Jack Kirby defined the house style, and other artists were encouraged to draw in a similar style, so there were many Kirby imitators around, but I can't think of any who were anywhere near as interesting as the original. 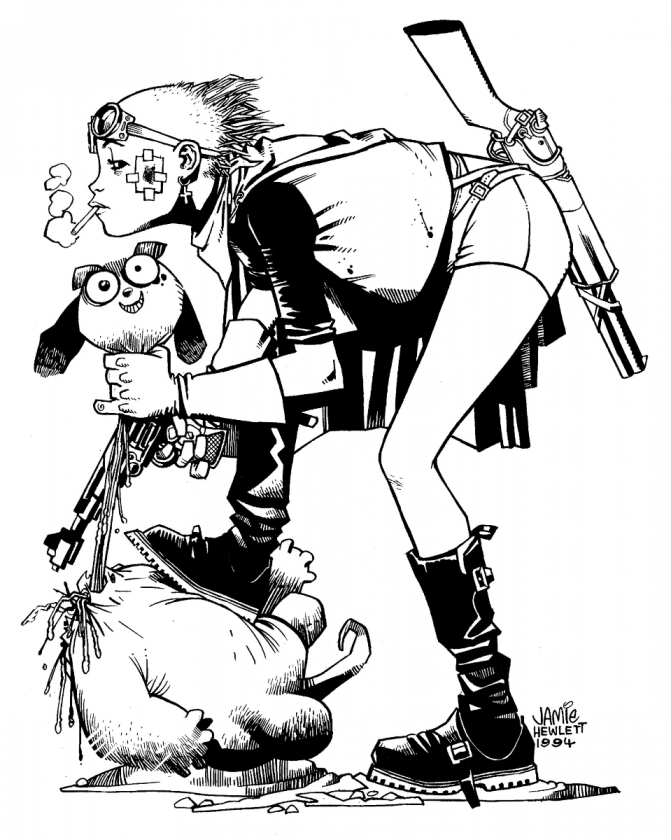 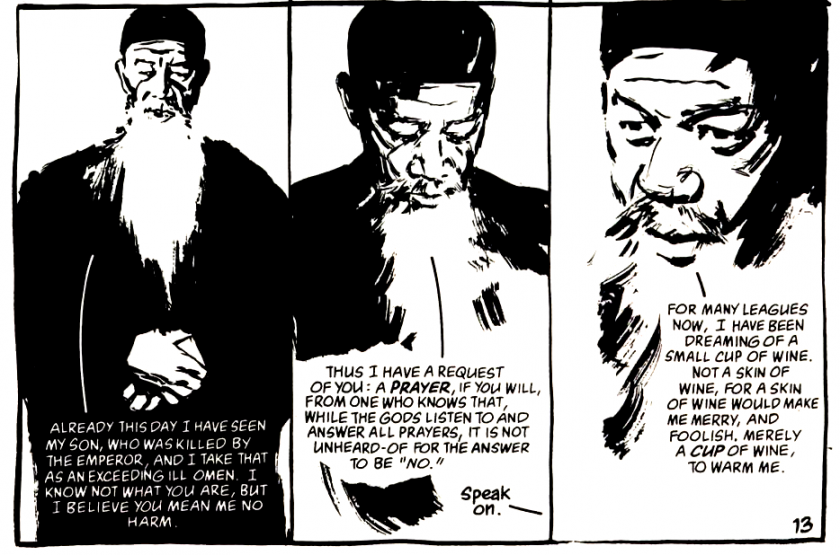 Jon J. Muth has illustrated various graphic novels and children's books, often using watercolor. My favorite work of his is Sandman #74, published in the collection The Wake, where he combines realistic people with bristly, loose inking. 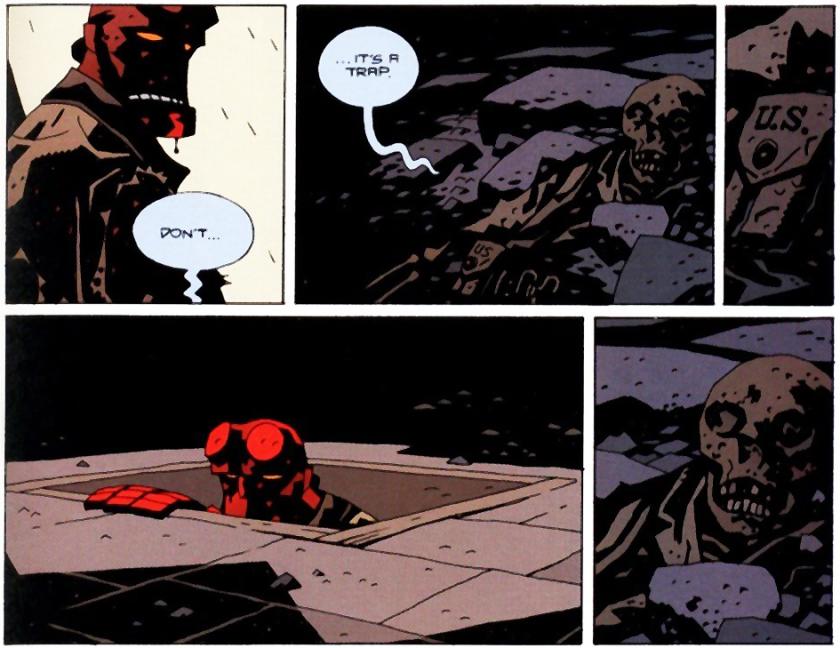 Mike Mignola is the creator of Hellboy. Over the years, his style developed, becoming  minimalist, angular, moody and dark, with very strong compositions, and a good use of negative space.

Hellboy: The Art of Hellboy

Duncan Fegredo has illustrated some Hellboy stories in a similar, although a bit more detailed, style. Alex Toth shares some similarities regarding the minimalism. 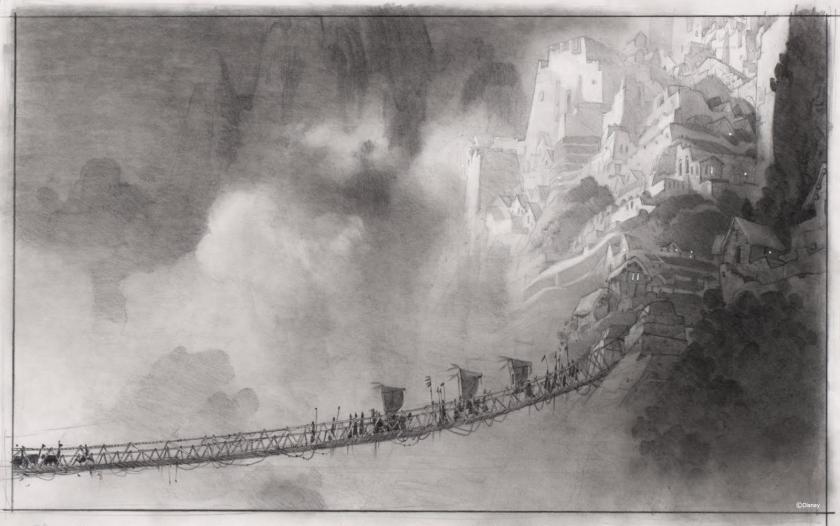 Paul Felix is a visual development artist working on Disney's animated movies. I like his sense of design, his compositions, and how he depicts light.