Ray tracing is a very calculation-intensive method for creating highly realistic images. Basically, it's the method they would've used for rendering dinosaurs in Jurassic Park or toys in Toy Story if it hadn't taken too much time to calculate the images that way.

In April 1999, instead of studying for a Computer Graphics exam, I got the ridiculous idea of writing a ray tracer in Java. Ridiculous, because writing a ray tracer seemed very complicated, and because Java is a slow language, and not anything you'd want to use for something that requires lots of computations.

It turned out that writing a ray tracer wasn't as hard as I thought. Writing a simple ray tracer took two days; then I added features to it for four more days, so I've worked on it for six days total. It would've taken even less if I'd looked up the necessary formulas in a book instead of trying to derive them myself. It's slow, as expected, so right now it's only useful for very simple scenes, but it was fun to create.

By the way: I passed the Computer Graphics exam, but ironically, I somehow failed to get a full score for my answer to the question "What is a ray tracer?" 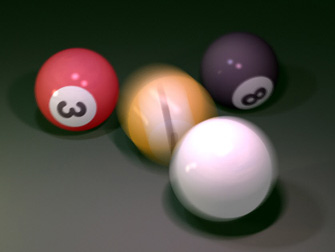 Update (September 2015): This page used to feature a Java applet that raytraced a pool ball animation. Because today's browsers generally lack support for Java applets, I've decided to port my raytracer to Javascript. Right now it's working decently, but it needs a few bug fixes and optimizations before I can add it to this page.

The only picture I've rendered with the latest version of Illuminatus is the one of the pool balls above. The pictures below were made during the development of Illuminatus. They look pretty similar, because I usually used the same basic scene (two rectangles and two spheres) to test the program. Click the thumbnails to view the images at full size.